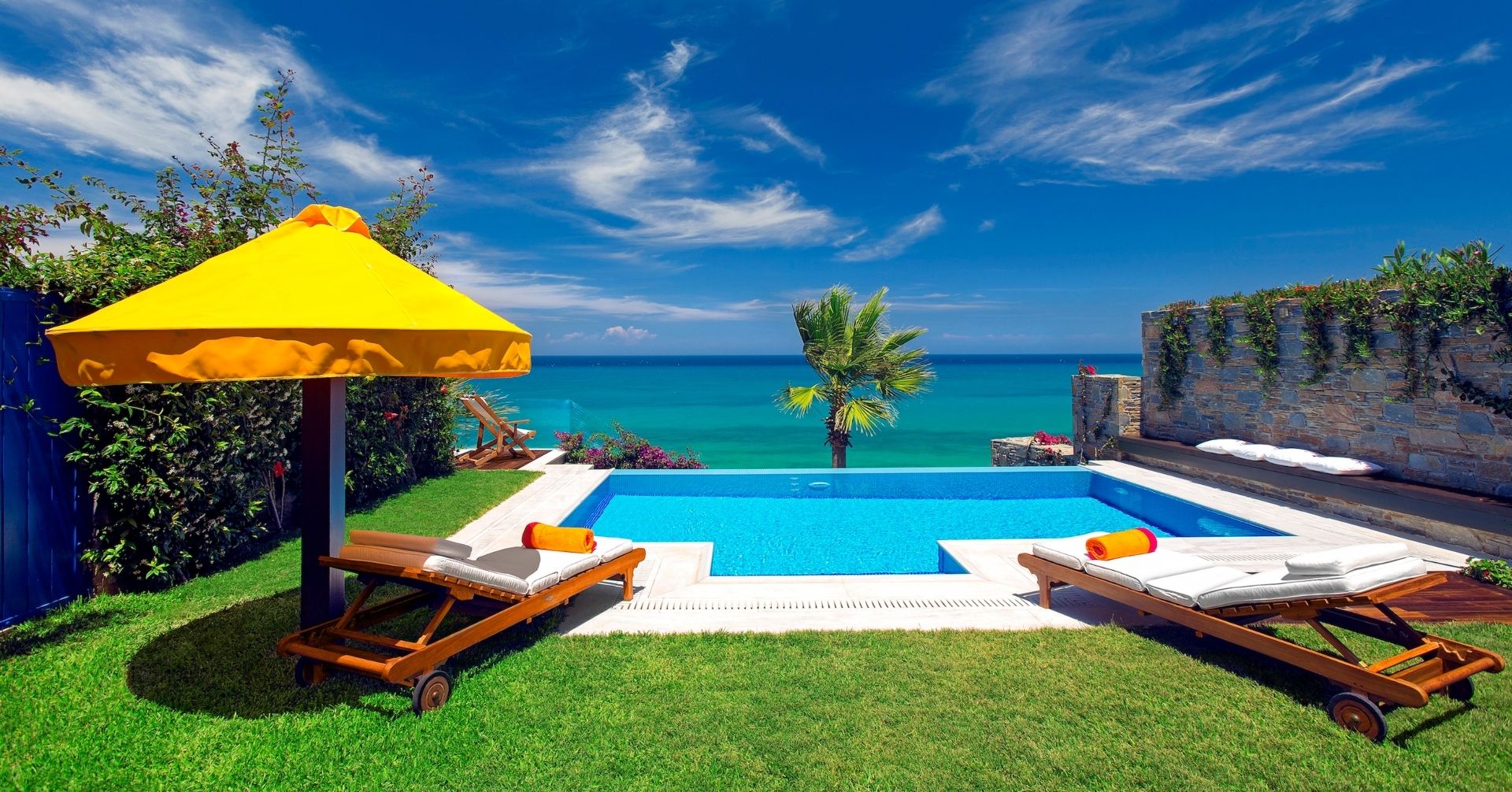 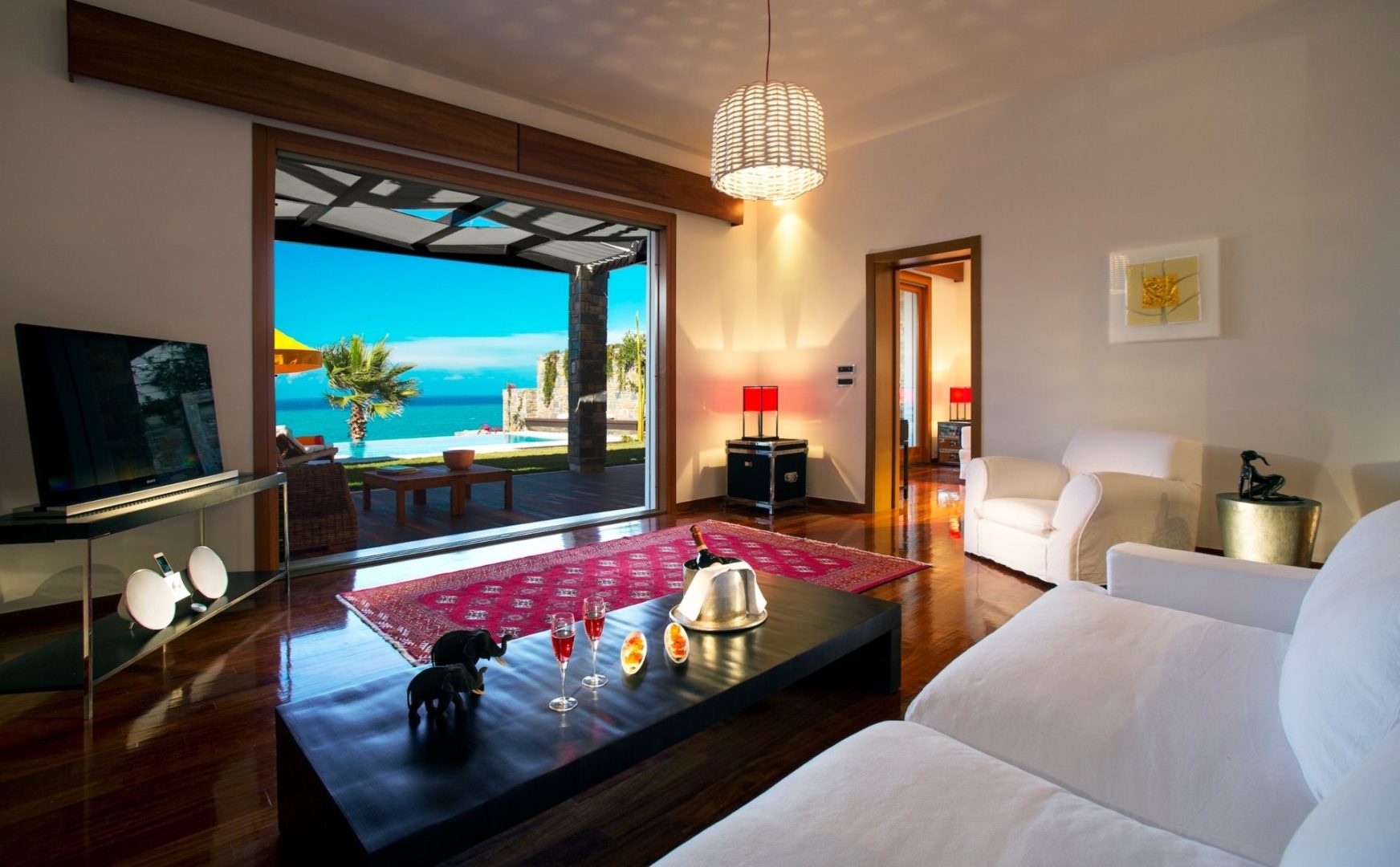 Porto Zante is a an award winning boutique resort of eight luxury villas. Located on a private beach on a secluded bay on the island of Zakynthos, the resort boasts stunning views and luxurious amenities. Guests at Porto Zante can enjoy the ultimate privacy coupled with first class service plus an array of unique experiences for both families and couples.

Located on the magical island of Zakynthos, west of Greece’s mainland, and only minutes away from the world famous Shipwreck, Porto Zante is a unique private resort set on the beachfront that during its 14 year history has been the choice of famous clientele, including political and business leaders and artists.

A member of the Small Luxury Hotels of the World, Porto Zante boasts a stunning collection of one to four bedroom deluxe villas and residences decorated and furnished with selected pieces of Armani Casa and paintings of prominent Greek artists, marble bathrooms and hightech amenities including Bang & Olufsen entertainment systems, iMacs and Sony Playstations. All of the villas also have at least one private heated pool and most have their own private section on the resort’s private sandy beach.

Guests can choose to be completely self contained using the in-villa dining service or choose to dine in the restaurant with its extensive Greek and Mediterranean menu. There is a full concierge and maid service 24 hours a day and guests can have their own butler.

Families are warmly welcomed at Porto Zante and young guests can enjoy a kids’ entertainment service that includes supervised fun activities and decorated luxury villa guest rooms and specially created dining menus. Guests also have a wide choice of watersports and land based activities including a gym, cycling, horse riding and tennis.

Guests seeking a more pampering indulgence and choose from a selection of over 20 signature Spa treatments that can be given either at the resort's award winning Waterfront Spa or in the peace of your own villa.

Located just minutes from Zakynthos town and the world famous Shipwreck beach, Porto Zante is also well placed for visiting many of the natural and cultural attractions in the region and the resort offers a wide range of private excursion options.

Zakynthos has a warm and sunny climate for the majority of the year with the risk of the odd shower of rain and some cooler periods in the winter months. From April/May onwards the weather settles but it can sometimes be cool in the evenings. From May onwards the weather generally settles into a pattern of long hot sunny days and balmy evenings especially in July and August when it can be very hot. Rain is unlikely but it can happen from time to time. May and October are particularly pleasurable months to visit.

Porto Zante is situated in front of a private sandy beach and boasts exceptional panoramic views of the nearby island of Kefalonia, the Peloponnese peninsula and the crystal blue waters of the Ionian Sea. Τhis luxurious resort is located in the area of Tragaki just seven kilometres from Zakynthos town and harbour. The nearest village, Tsilivi with a selection of shops and restaurants is only a kilometre away from the resort (approx. 10-15 minutes walk).

The resort is 10 minutes drive from the airport and complimentary transfers are provided.

The eight world class luxurious villas at Porto Zante have been carefully designed to offer guests the ultimate privacy and provide stunning views of the Ionian Sea. The villas have been beautifully decorated with designer furniture by Armani Casa, Gervasoni, Philipp Plein and Greek art decorates the walls.

The marble bathrooms feature Jacuzzi tubs and separate shower cabins and Bulgari amenities and the luxurious interiors of the villas are equipped with Bang & Olufsen entertainment systems, personal MacBook Air’s or Mac Desktops, large-screen satellite TV’s in all rooms and bathrooms, fitness equipment and preloaded iPod’s and Sony Playstation’s. The villas also have kitchens or kitchenettes complete with Bernardaud porcelain, cutlery and glasses by Christofle Paris and Nespresso Coffee Centers. Outside all villas have at least one private heated swimming pool, a private garden and an outdoor dining area.

Deluxe Spa Villa: Located on the beachfront the villa comprises a large master bedroom with king size bed, open plan living area with a kitchenette and a separate living room with sofa bed. The bathroom features a Jacuzzi bath tub and separate shower cabin with hydro-jets. The villas has a private pool (28m2) and boasts exceptional views of the Ionian Sea. Deluxe Spa Villas sleep up to four people and the indoor space is approx. 85m2.

Executive Spa Villa: As per the Deluxe Spa Villa but with the added benefit of a private beach area. The villa also boasts views of the nearby island of Kefalonia, Kyllini Castle in the Peloponnese and the Ionian sea.

One Royal Spa Villa: Perched over the Ionian Sea, offering a private area on the resort’s beach and boasting a larger outdoor pool (45m2). This luxurious villa comprises a master bedroom with king size bed, a living and dining area with views of the private pool and the sea which can be converted in to a spacious sleeping area for up to two children, an in-villa office and small kitchen. There are two large bathrooms one with magnificent sea views and the other overlooking the private courtyard. The One Royal Spa Villa sleeps up to four people and the indoor space is approx. 120m2.

Presidential Spa Villa: Located on the beachfront the Presidential Spa Villa consists of an entrance hall, two master bedrooms with king size beds, two en suite bathrooms, a living and dining area and an additional separate living area which can be converted into a sleeping area for two children or one adult with access to its own separate third bathroom and a small kitchen. Panoramic doors lead out to a private deck with direct access to the private pool (40m2) and landscaped gardens with an open-air shower and dining area. The Presidential Spa Villa sleeps up to seven people and the indoor space is approx. 170m2.

Royal Spa Villa: A stunning award winning villa which has hosted many prominent international figures from presidents to artists and leading business people. Located on the beachfront the villa offers a private beach area with personal sun beds and umbrellas a private heated pool (60m2) and an outdoor spa pool. The villa’s private estate features imposing high stone walls and iron gates for the ultimate privacy and security. This luxurious villa has exceptional views and features two master bedrooms with king size beds, three bathrooms, two large walk-in dressing rooms and the living and dining area also features a fireplace. The Royal Spa Villa sleeps up to six people and the indoor space is approx. 250m2.

Grand Residence: Ideal for large families or groups of friends the Grand Residence is located on the beachfront with its own private beach area equipped with personal sun beds and umbrellas. From both the bedrooms and the living room areas (ground floor), panoramic glass doors lead out to a private deck which boasts two private swimming pools (each 40m2) and a beautifully landscaped garden with sun beds, teak garden furniture, an open-air shower and dining area. The upper level bedrooms & living room areas offer stunning panoramic views of the bay and also a private outdoor terrace. This luxury villa consists of an entrance hall, four master bedrooms with king size beds, four en suite bathrooms, two luxuriously decorated living & dining areas and additional separate living areas on the first floor which can be converted into two sleeping areas for children or adults with access to their own two separate additional bathrooms and a small kitchen. The Grand Residence sleeps up to 14 people and the indoor space is approx. 370m2.

Imperial Spa Villa: Set is own private area on the beach amid large private gardens the Imperial Spa Villa is ideal for guests seeking to rent a private estate. This four bedroom villa features three private heated outdoor pools and an outdoor spa pool. The Imperial Spa Villa comprises a large two bedroom villa and two attached large one bedroom guest villas with their own private pools connected through a private path in their gardens. The villa’s private estate is enclosed by high stone walls and iron gates for ultimate privacy and security. This luxury villa consists of an entrance hall, four master bedrooms with king size beds, seven bathrooms, a luxuriously decorated living and dining area with a fireplace, a large fully equipped kitchen and two staff quarters with their own bathrooms and separate entrance.  The Imperial Spa Villa sleeps up to 14 guests and the interior space is approx. 550m2.

Families are warmly welcomed at Porto Zante Villas & Spa. Children will love the private sandy beach which is perfect for young children and includes various beach and pool toys. Young guests can also enjoy non-motorised watersports such as sea cycling and canoeing.

There is a wide choice of villas sleeping from four to 14 guests which are perfect for families and family groups.

Kids’ Corner and Kids Services: Whilst the resort does not have a dedicated children’s club, there is a Kids’ Corner (children’s playground) and the experienced entertainment staff do provide a tailor-made entertainment programme for children from three years upwards, which includes activities such as trips to the local village and waterpark , pony riding on a farm, mini golf and cycling. Parents can book this service on arrival. Families will also be treated to surprise gifts and specially decorated rooms in the villas.

Children’s Meals: The resort’s chef has created a dedicated children’s menu and high chairs are available in the restaurant.

There is a wide choice of activities on offer at Porto Zante. Watersports include jet skiing, waterskiing, banana boats, canoeing and paddle boarding, snorkelling and private yacht excursions. There is also a selection of fitness activities including a gym, beachfront yoga, personal training, horse riding and cycling. Guests can also enjoy complimentary access to the nearby tennis club and the waterpark in Tsivili (approx. 200m away) which is especially popular with families.

Caretta-Caretta Turtles: Visit Marathonisi Island, home to the endangered turtle species Caretta-Caretta, and swim side by side with these beautiful creatures. Protected by the International Union for the Conservation of Nature.

Navagio Beach (Shipwreck): Just 20 minutes by private speedboat or motor yacht lies one of Greece’s most popular and photographed attractions, Navagio Beach. With crystal clear waters and the shipwreck of a notorious smuggler’s ship it has been voted one of the best beaches in the world by Conde Nast Traveler.

Blue Caves: A succession of caves reflecting the striking deep azure color of the sea, the Blue Caves invite you to admire their wild beauty and dive in their marvelous waters. 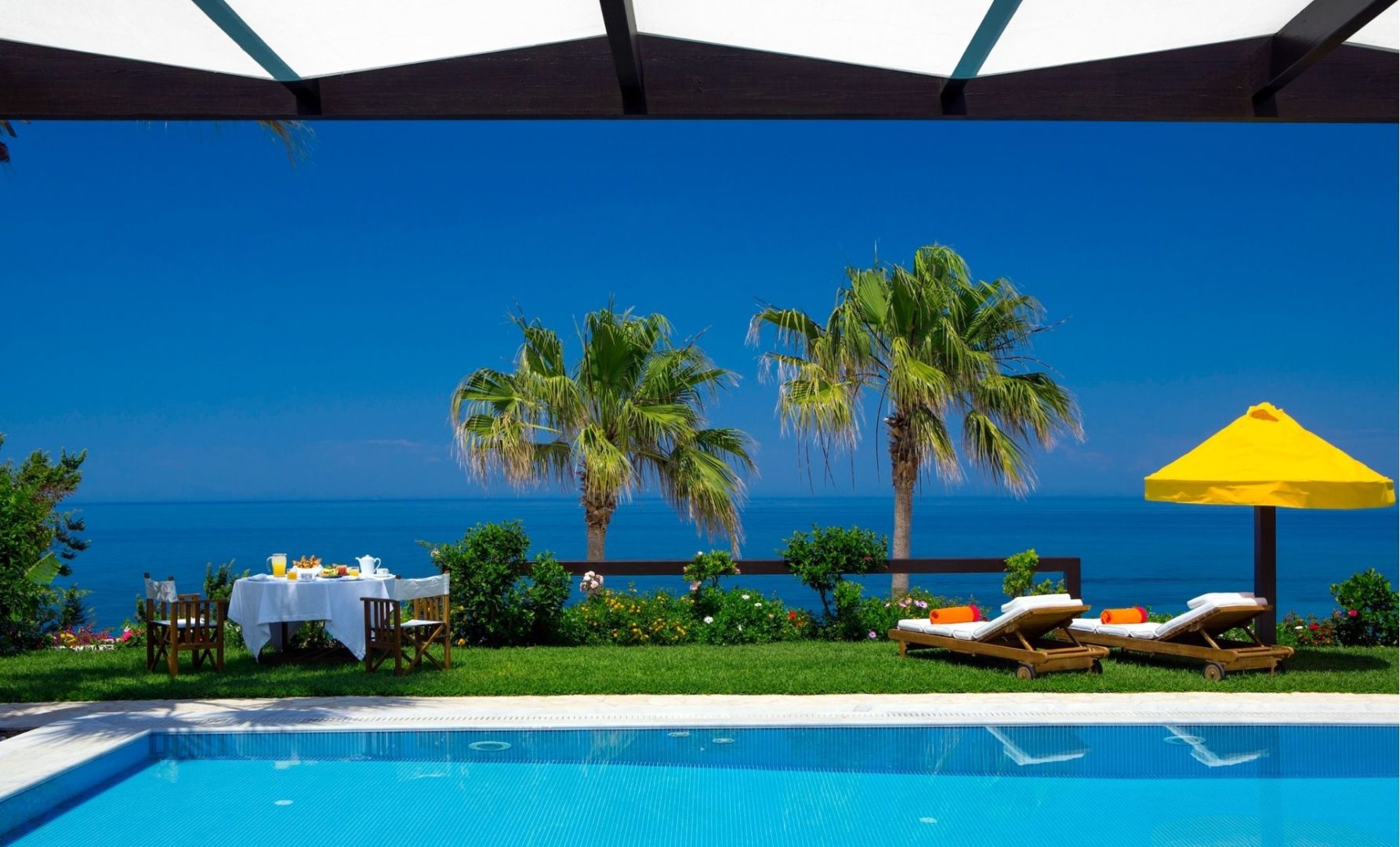 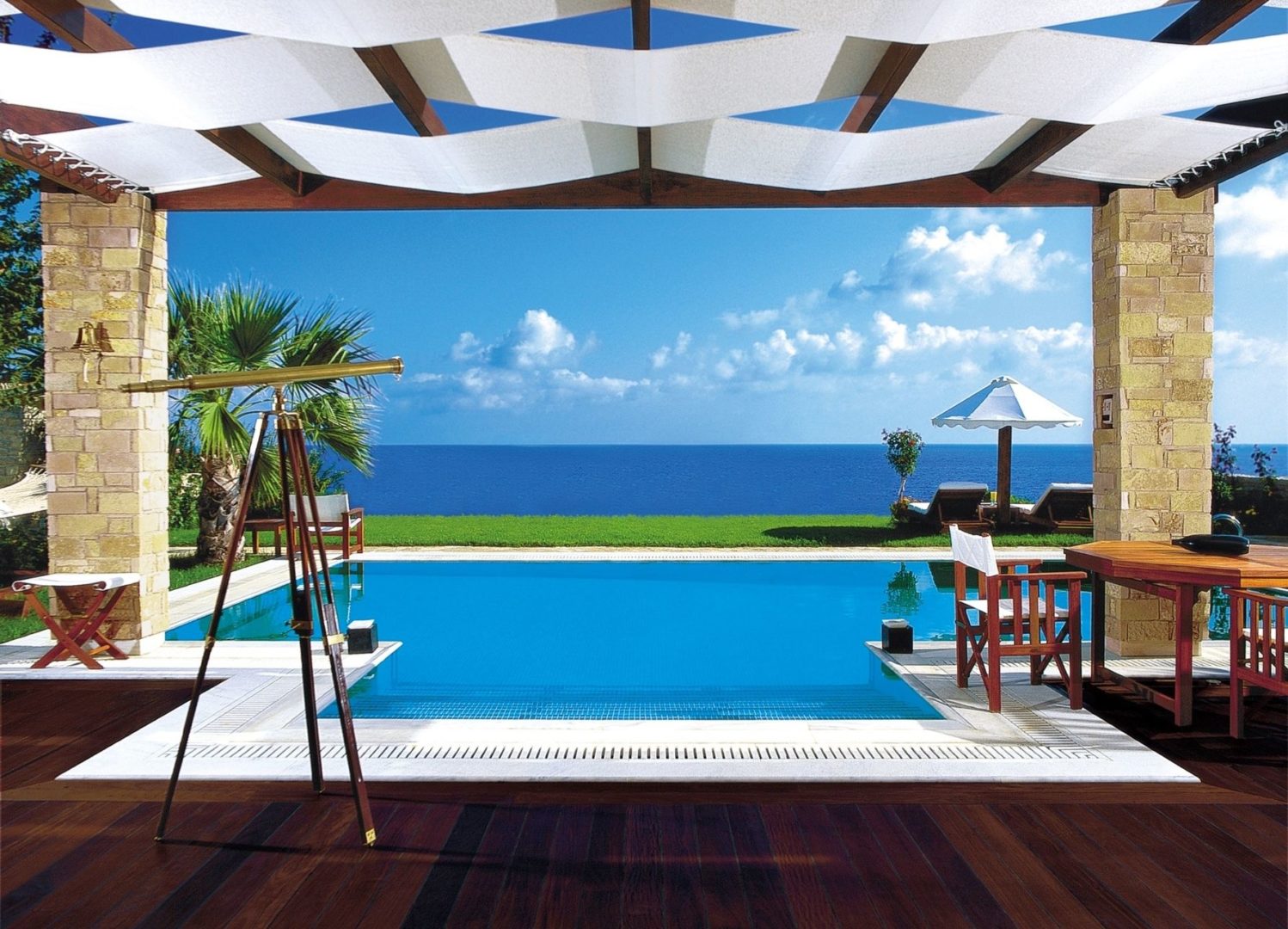